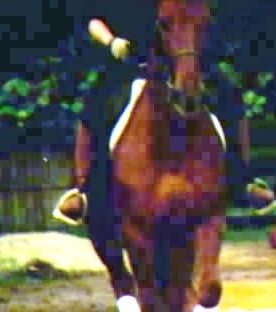 A hundred years ago there was no such a thing as dressage or jumping. It simply was called riding or equestrian training. Gymnastic work, jumping, gallops on the race track, and outings on groomed trails and through natural forests and terrains were all equal part of horse and rider training.

Indeed there were horses that found greater ease coping with all kinds of natural and artificial obstacles. Other horses excelled with smoother gaits, greater rideability, while perhaps showing less courage at 6ft drops and other challenges in the terrain. Even when I grew up in the 1950s in cavalry tradition imbued Switzerland there was no such thing as dressage training versus jumper flatwork.

Weekend training exercises were called tournaments and competitions (not shows as they are commonly referred to in English language countries). Dressage classes were offered and divided into levels. Until the mid 1960s they ended with a mandatory 1m to 1.1m “obedience jump.”

After the, “X Halt, salute, leave arena at free walk on a loose rein,” you gathered the reins once outside the arena at A, turned the corner and, without shortening stirrups, picked up either trot or canter to clear the obedience jump usually positioned near “B” or “E” on the long side. Not taking the jump resulted in elimination from the dressage score board.

It was also rather common to enter both, dressage divisions and jumper classes, at the same tournament and with the same horse. At the end of the day a combined score was given out. At the time, we still had the rule at home: “your GP dressage horse must be able to negotiate a decent 1.1m to 1.25m jumper course without the speed; and your GP jumper must be able to show a pleasant M (medium) dressage test without the extra collection.”

Although competing different horses, riders like Reiner Klimke competed at the same Olympics in GP Dressage and in Eventing (dressage, endurance, race-gallop, cross-country, stadium jumping), or one of the most celebrated female riders of all times, Inge Fellgiebel, who won the Hamburg Dressage Derby three years in a row, also competed on a different horse three times in the fiendishly difficult Hamburg Jumper Derby.

It seems that the division between dressage and jumping, and in particular the different approach to training riders and horses, didn’t really start until the 1970s–at least not in Europe.

So, what parts of dressage do or don’t play a role in the training of today’s jumpers?

What has been made of dressage as a show-poodle discipline of conditioned, pressed-into-a-frame horses, man-handled with extra gear into front-to-back riding, luckily will fail in the bigger jumper ring. Horses so drilled will stop, run out, or simply drop their gears over a jump.

We have however seen those “walking tack store” bridled horses, with a variety of bits and extra restraining aides in big jumper competition too. There never is a justification for the use of a double-bridle with a running martingale (not on the snaffle reins), combined with a hackamore.

As much as a dressage horse, a jumper needs good dressage gymnastic work. There are some winning and then there are some losing concepts here however.

A horse that on the flat doesn’t go supply through its swinging back will not suddenly have or show the strength to develop an awe-inspiring bascule over a jump along with an heel-to elbow tuck and a lightning fast hindleg.

A horse that has learned to slip behind a rider’s leg in such exercises as front-to-back instead of back-to-front ridden transitions will not be able to lengthen or shorten its ground-cover at a mere stretching or shortening of the rider’s spine.

A horse that has been mistakenly schooled in travers (instead of in renvers) will not allow its rider to straighten it quickly enough in a jump-off. Not to mention that such a horse will be more prone to slide behind a rider’s leg and run out or refuse in front of a fence. Certainly not something we want on the jumper course.

So, what are the best exercises? No different from proper dressage basics, a jumper in training too should master step by step the stages of the standard training pyramid. 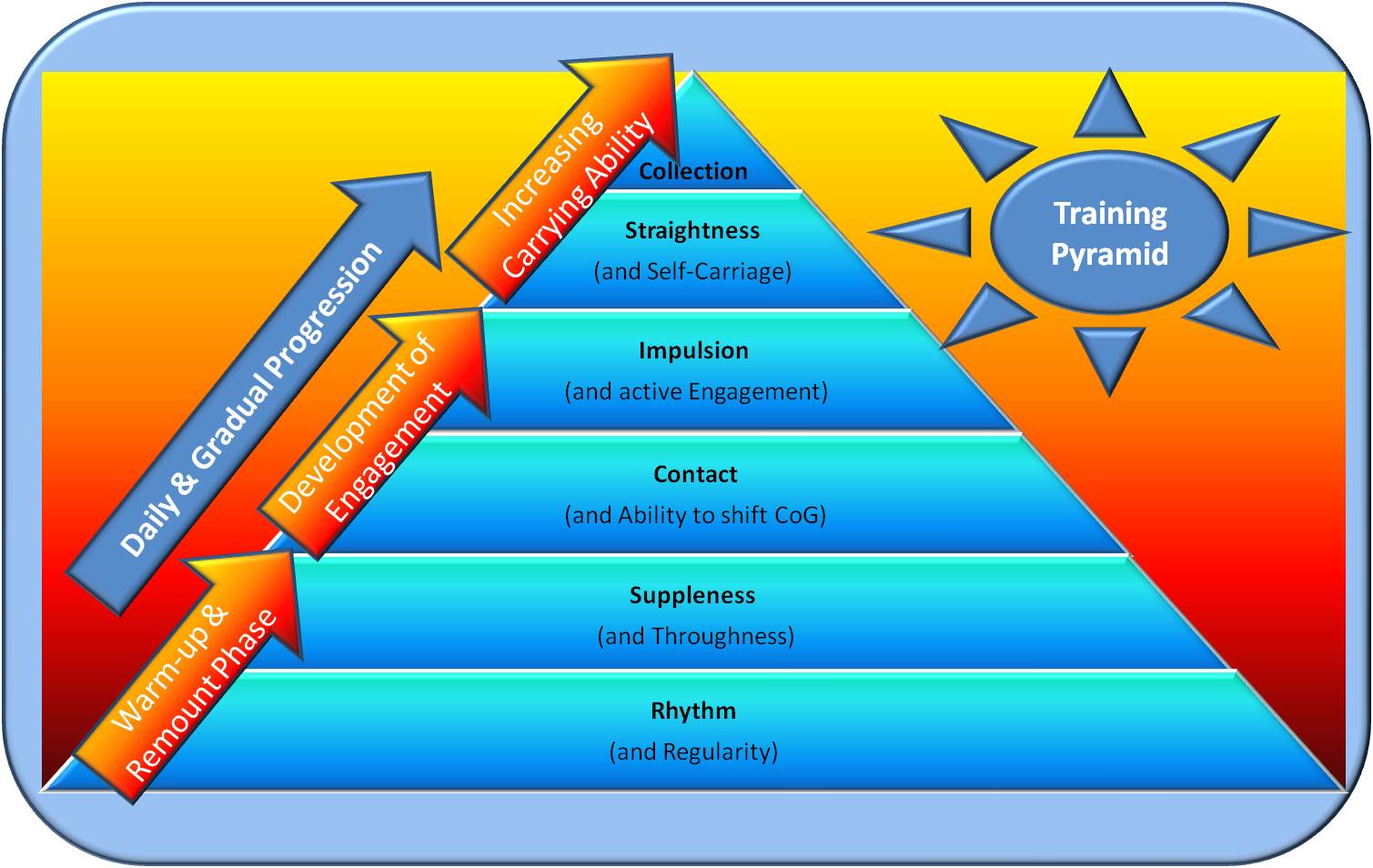 Balanced, easy changes of direction, with the goal of always moving in front of the rider’s leg, are non-negotiables. Progressing from simple rhythmical lines that we can happily ride over single poles and pole grids, we progress to meticulously ridden changes of direction with changes of a longitudinal bend that mirrors the track the horse is ridden on.

The latter always must incorporate one length of straight. The horse with its front and rear pairs of legs cannot change from left to right directly without exiting the change of direction with shoulders falling out or quarters falling in. Instead, the horse must change left to straight and subsequently straight to right.

It is at this point that straightness issues come to plague the rider. Right shoulder falling out, left rein contact being avoided, left quarters falling in and so forth, are common issues and signs of lack of straightness. Transitions into and out of the corners will offer wonderful opportunities to remedy those losses of straightness.

The rider must diligently keep his active inside leg near the girth, while his outside seat and leg remain in passive guarding position behind the girth. Latter must actively straighten out the quarters should the horse try to swing them out into an evasive and not helpful leg-yield like crossing.

Mastering this position is particularly important if a rider needs to gain ground in front of a large jump where the ideal stride has not yet been found. The moment the distance is established the rider gives up the shoulder-fore position and rides the horse straight for the last two or three strides prior to the take-off.

Equally beneficial for the jumper rider is the schooling of the renvers, which is sadly much neglected. The hindlegs stay on the track, while the shoulders are moved to a 30 to 45 degree inside track. Both outside legs cross over and in front of the inside legs, and the horse is bent into the direction of travel.

Horses shift their weight towards their quarters and free their shoulders in renvers. Especially by practicing walk to (counter-)canter departures in the renvers, the rider is able to school quick responses of the quarters and a great ability to quickly rock back over its elastic hocks.

The jumper rider looks for a safely strengthened and responsive horse. Only with an elastically schooled horse the rider can cover more or less ground, and precisely ride at greater or lesser speed without losing balance and power.

Regularly schooling smooth and responsive transitions from gait to gait, and such within a gait, e.g. from working to medium canter and back, lay the ground work for the responsiveness a jumper requires. Straightening work through meticulously ridden fluid changes of direction, mastering shoulder-fore and shoulder-in as well as renvers, furthermore aide in preventing stops and run-outs at jumps.

And the bottom line? Like what it was developed to be, a means to a purpose, not an end in itself, dressage work must fulfill its goal of producing a longer lived, healthy and supple horse, easier to be piloted, and willing to do its trusted rider’s bidding.

The info provided on these pages is strictly of informational value and does not claim to treat or heal. If you have a health problem please consult with your accredited health professional.

CoachMeToo takes advantage of today's technical environment. Our focus is on e-coaching and mentoring of structural professionals for humans and horses.

In addition, for everyone, we offer Self-Help technique workshops and course - some in-person, some online.

And, via Trainmedo, for the avid equestrian Dr. Rivkah Roth offers dressage lessons and biomechanical troubleshooting and equiopathy coaching for clients worldwide.